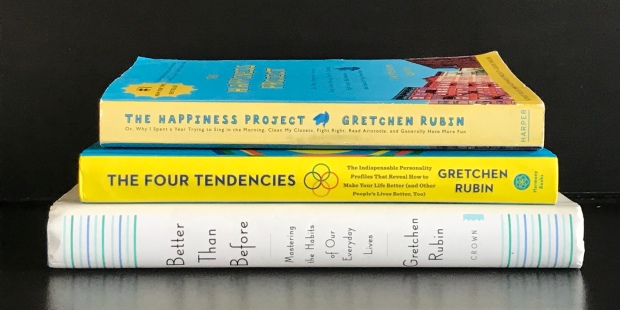 At the beginning of 2011, I wasn’t in a good place.  I had a wonderful life (a pretty decent job, a wonderful husband) but I was feeling blah! My sister had just gotten a new puppy, Radar, but needing to go back to work. He was still too young to be left at home alone.  So, I drove up to nanny.  While I was there, she asked me if I had read Gretchen Rubin’s The Happiness Project: Or, Why I Spent a Year Trying to Sing in the Morning, Clean My Closets, Fight Right, Read Aristotle, and Generally Have More Fun. I had not.  When she went to sleep, I stayed awake and read the first chapter: “Getting Started”. It set off the waterworks.

I am happy – but I’m not as happy as I should be.  I have such a good life, I want to appreciate it more – and live up to it better. I had a hard time explaining it.  I complain too much, I get annoyed more than I should.  I should be more grateful.  I think it felt happier, I’d behave better.”

She introduced a word that I had never heard of before: malaise – a recurrent sense of discontent and almost a feeling of disbelief.  That was what I was feeling.  I had to have this book! And I went out the next day and bought my own copy.

Every month, Gretchen tackled a new category: January – Boost Energy where she tried to form habits like going to sleep earlier and tackling a nagging task. And in February – Remember Love, she tried to give proofs of love and quit nagging.  So on and so forth.

At that time, I was convinced (note that I said at THAT time) I was a very logical person – a left-brain, definitely.  And Gretchen was approaching this very subjective topic of happiness in a logical, systematic, and determined way. I don’t know how to make you understand how much that appealed to me. It was definitely what I needed at the time.

The results of Gretchen’s work have become permanent fixtures in my life.

Her concept of writing personal commandments, “personal overarching principles that can guide decision making”, appealed and I have slowly developed my own over the years.  They include: Be authentic and Find the Peace. Her quote: “the days are long but the years are short” has been a refrain that I utter every week as I make it through the day.

Gretchen took her happiness project and focused on the details of habit formation in her next book, Better Than Before: Mastering the Habits of Our Everyday Lives.  That led her to seek to understand why it was so much easier for some people to form habits than others which led to her next bestseller, The Four Tendencies. I’m an Obliger and that knowledge has led to some amazing realizations in my life, albeit a conversation for another day.

You can’t go wrong reading any of these three books if you are interested in becoming happier and forming habits that have a decent chance of sticking.

Catch up on the rest of this series – This Bookman: Meditations & Miscellany.

thanks so much for sharing

what do you think? Cancel reply

my favorite ways to connect